A little about peppermint 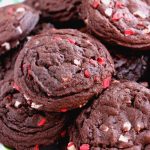 “The smell rejoices the heart of man. “Written by the sixteenth-century herbalist John Gerard when referring to the aroma of peppermint. A natural and favorite flavoring in jelly, tea, and candy, peppermint has potent healing properties as well. 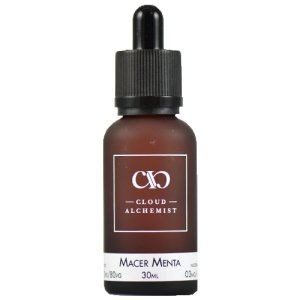 Chocolate Mint is a flavor that I used to loathe simply because chocolate is not a flavor that, back in the day, was well translated into e-liquid form. It would, more often than not, be depicted as the overly sweet, artificial flavoring commonly found in chocolate flavored hard candies and the like. But recently, with flavors like Macer-Menta from the folks at Cloud Alchemist, I have been requested to re-evaluate my stance on chocolate e-liquid, and I have indeed been astounded at the rich, creamy creations these and other vendors have managed to create with a strong chocolate component.

So when I got to Cloud Alchemists premium e-liquid Macer-Menta, I came into it with an open mind and high hopes. My initial concern was centered around how realistic their chocolate flavoring would be. I was impressed, if not astounded to find an entirely altogether different and perfect crisp peppermint layered with dark chocolate cookie flavor.

I’ve had quite a few chocolate mint blends lately, most of which were quite tasty, some of which were truly magnificent, and of course, some of which fell flat. So when I grabbed the next bottle in line for review, Cloud Alchemist Macer Menta, I was hopeful that they had gotten the ratio of mint to the chocolate right, and that the juice was of the same high quality as the other flavors I’ve reviewed from the vendor.

The chocolate is indeed delicious, with a pleasant, but not overpowering sweetness to it. There is a little of the granular feeling associated more with cocoa than chocolate, but the flavor itself is dead-on, with a mild creaminess and a smooth, lush flavor. The mint melds seamlessly with the chocolate, bringing with it the chill, and of course, the throat hit associated with menthol and kool-ade based e-liquids. The chocolate does not overpower the juice either, even with the extra wattage from a sub-Ω coil. This last part could simply be because of the chocolate base(s) used by Cloud Alchemist.

There seems to be an additional component in the blend… a very mild, bready, cookie, almost graham cracker-like note in the very back of the profile. This adds a sort of petite flavor but lends the juice some backbone while providing a fuller, heartier flavor. The overall profile is sweet, but miles from cloying, thanks to the crisp, refreshing mint that cuts through the chocolate and leaves your mouth with a cold tingle.

Whether you favor a standard vaping rig or a sub-Ω coil, this juice holds up fine at both lower and more extreme wattage. Within the normal vaping wattage spectrum, Macer Menta has a wide sweet spot, depending on just how much of the cool mint you want. At lower wattage, the mint is more mellow, subdued even, but with a bit more voltage/wattage, it can be downright chilly. On a sub-Ω coil (I used a Nemesis/Nimbus with dual 28ga Kanthal coil at .5Ω on XC-116) the mint gets quite a bit more intense, providing even more of the crisp, bright, chilly flavor and mouthfeel, along with the expected increases in both throat hit and vapor production.

Finally, I like this e-juice and would recommend as one of the best ejuice in its category.

These are the current flavor options they have out in Cloud Alchemist online store: